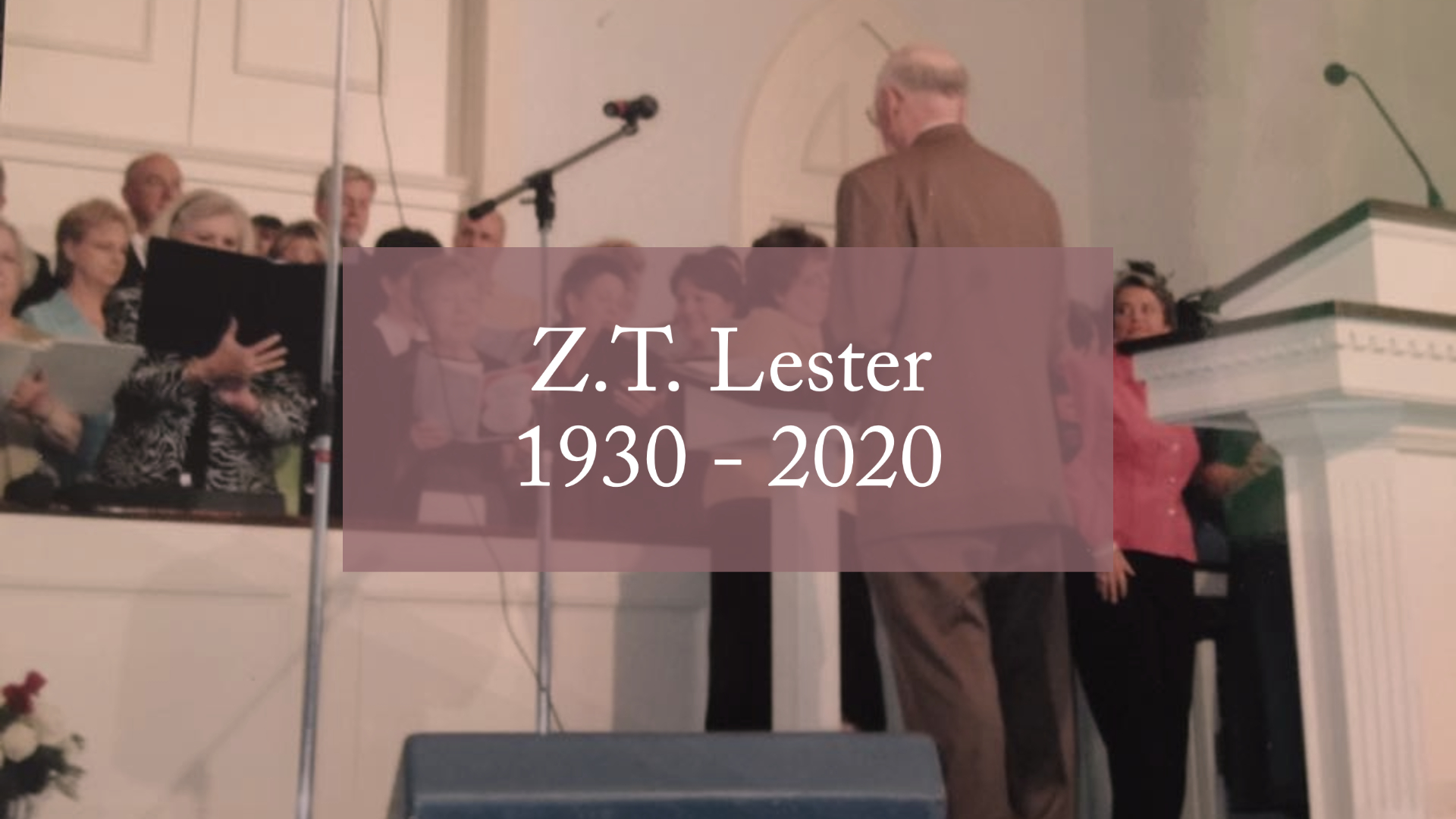 We received word today that our beloved friend, Z.T. Lester, has gone home to be with his Savior. Our hearts go out to Vivian Lester, Terry, Jerry, Tim, and Todd, as well as all of his family.

No one can calculate the impact that Z.T. Lester has had on the Buck Run Baptist Church, or even on church music. He was the Minister of Music here for thirty-five years. During that time, several pastors came and left, but Z.T. remained a steady influence who made an indelible mark on the lives of everyone who worshiped here.

I am not exaggerating to say that Z.T. was a trendsetter among Kentucky Baptist churches. Whether it was the Living Christmas Tree, the Easter Cantata, youth choir (the Ichthus Singers) tours, worship banners, or orchestra in the worship services, Z.T. was doing stuff that no one else was doing and before anyone else was thinking about it, especially in a church the size of Buck Run. He had a way of demanding and producing excellence in people. Amazingly, he served as a high school principal and had a full career as an educator while simultaneously releasing so much Christ-honoring creativity in his church.

Z.T. was a committed family man. He and Vivian were one of those rare husband-wife teams that were genuinely one flesh. They did everything together and were a perfect complement to one another. They were inseparable and invincible, always modeling what it means to serve together for the glory of Christ.

When I became pastor of Buck Run, Z.T. did everything he could to make me succeed. He partnered with me as though we had been together for years and I always knew he had my back. When some people struggled to adapt to me as their pastor, Z.T. would speak up for me and assert his confidence that I was God’s man for this church. I can never be grateful enough for what that meant and how encouraged I was.

Staff meetings with Z.T. were a riot. He was always telling jokes and dropping one-liners. It was all I could do to keep him and Ken Underwood in line, and when you put them in the room together on a Monday afternoon, it was a lost cause. I don’t even remember the whole joke, but once Z.T. told something about a guy who would say, “Hey, pweecha . . . ” to his pastor, and from then on, every time I saw Z.T.—including the last time I saw him a few months ago—he would greet me by saying, “Hey, pweecha!”

Z.T. was a Christ-centered man. His whole life was directed toward the Lord and serving his church. Three of his four sons entered the ministry, and all of them have been greatly used of the Lord. What a testimony they all bear to the influence of their father.

I thank God for the life and memory of Z.T. Lester. A great saint of God has gone home. I know he heard his Savior say, “Well done, good and faithful servant.” I long to hear that one day, too, but I also know that soon after I enter the joy of my Lord, I’ll hear someone else say, “Hey, pweecha!”