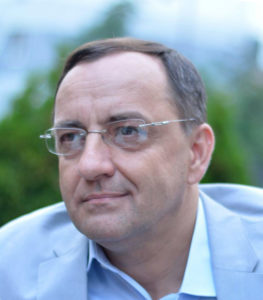 Cristi Chivu grew up in Communist Romania without any interest in Christianity. Now, Cristi coordinates international projects for the Romanian-American Mission and equips Christians in the United States and Europe to make disciples.

Coming to Christ in Romania

Cristi was born in Piatra Neamt, Romania. At the time, Romania suffered under a Communist government, and Eastern Orthodoxy dominated the religious landscape. As a result, Cristi grew up with little concern for Christ. Immediately after Romania’s anti-Communist revolution, however, Cristi had an opportunity to hear the gospel. In March 1990, Josh McDowell came to Romania and preached at a large crusade in Bucharest. Then an electrical engineering student, Cristi gave his life to Jesus. Soon after his conversion, Cristi began serving as youth minister at Holy Trinity Baptist Church in Bucharest, the church where Cristi was baptized in 1990. In 1993, God called Cristi to full-time ministry, so he left his career as an electrical engineer and began serving with the Missions Department of the Baptist Union of Romania.

In 1994, Bob Jackson, the senior pastor of Buck Run Baptist Church, led a mission team to Romania to help the Baptist Union of Romania plant seven new congregations. The team worked closely with Cristi’s office, and the Lord began forming a bond between Cristi and the Buck Run team. In August 1996, Cristi and his family moved to Frankfort, where he served as international missions liaison at Buck Run and as the international coordinator with Romanian-American Mission. Cristi and his family eventually returned to Romania, and Cristi served as an outreach pastor at Holy Trinity Baptist Church of Braila and continued to coordinate the mission work of RAM part-time. As RAM grew, Cristi began serving as international coordinator, a full-time role that allowed him to teach and train pastors, missionaries, and lay leaders from partner churches in Romania and Europe in evangelism, missions, and church planting.

Ministry in the U.S.

At the request of RAM leadership, Cristi and his family moved to the United States in January 2017. Now, Cristi serves American, Romanian, and European churches in a variety of ways. Cristi organizes and leads international projects, encourages American Christians to embrace a Great Commission lifestyle, and trains churches and Christian schools for cross-cultural evangelism. Moreover, as RAM transitions its office to Mobile, Alabama, Cristi will work closely with students at the University of Mobile, training them for missions, evangelism, and church planting and leading them in international mission projects. Through RAM, God is using Cristi to multiply disciples around the world.

How to Connect with Cristi