Missions Monday: For the Glory of the Lord 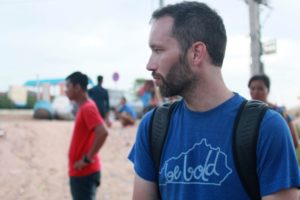 Taylor Hancock, son of Mike and Marla Hancock, is a homegrown missionary actively seeking to take the Gospel to the nations. He was born into Buck Run, growing and developing in his understanding of Christ through immeasurable investment from Buck Run members, Sunday school teachers, Student Ministry leaders, and consistently solid preaching. At age nine he was baptized, making his personal profession of faith in Jesus public.

In seventh grade, while working on a project for a Kentucky United Nations Assembly (KUNA) focusing on China, Taylor first heard the call to international missions. Over the following years, as he continued his involvement with KUNA, he completed projects on Israel, South Africa, Japan, and Monaco, studying each nation, their cultures, and major issues faced by each nation. By the end of his senior year, his heart was broken for the nations—for those who had never heard the Gospel and for those who had heard and rejected or dismissed the Gospel.

In June 2005, Taylor went on his first international mission trip—a church construction trip—to Brazil with a team from Buck Run. Since then, he has been on mission trips to South Africa and Scotland, worked abroad as a teacher in the West Bank and as an interim student pastor in Hong Kong, and led a team from his church in Hong Kong to Cambodia. Taylor is back home in Kentucky now, attending The Southern Baptist Theological Seminary and pursuing an M.Div. in International Missions, with the intent of moving overseas indefinitely to advance the Gospel. Concurrently, he is working through the application process with the IMB to do the mid-term Macedonia program in which he could work toward completing his studies while in the field. Though he is uncertain where the Lord will eventually take him, Taylor is certain that the Lord has called him, as He calls us all, to “go and make disciples.”

How Can I Pray for Taylor?

How Can I Connect with Taylor?